Intermediality in this exhibition arises as much from the collaboration between each artist as from within their practice itself.

The Boat is Leaking. The Captain Lied. – Fondazione Prada

“The Boat Is Leaking. The Captain Lied” 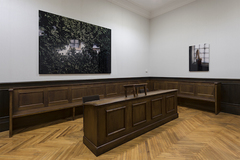 Spread across three floors of an eighteenth-century palazzo, this exhibition visualizes a broad question: What happens when falsehoods stand in for the truth? For this collaboration, curator Udo Kittelmann, artist Thomas Demand, set designer Anna Viebrock, and filmmaker Alexander Kluge look to the eternal worry over art’s duplicity. This time around, at issue are not the objects themselves as much as the walls that support them.

The design of the show is provocative, blurring distinctions between discrete works and a single massive installation piece. Viebrock’s stage sets from previous theatrical productions have been appropriated throughout, providing a physical frame of contingency for the other artists’ work. The ground floor offers a straightforward introduction to the artists and demonstrates how their practices address the deception of vision. First is Demand, whose video Ampel (Stoplight), 2016, features an animated replica of the titular device, nearly indistinguishable from the real thing. Nearby, Kluge’s film Die sanfte Schminke des Lichts (The Soft Makeup of Lighting), 2007, subjects actors to various lighting effects, revealing the trickery of high-definition cinema. Two doors designed by Viebrock flank the projection, one of which is an astonishingly realistic hotel lobby entryway. Seemingly accessible, both doors are locked.

The upper floors slip fully into fabrication, with Viebrock’s previously impenetrable sets now accessible as they fill entire rooms. A counterfeit cinema plays Kluge’s films; its exit leads to a courtroom where Demand’s photograph of a model of a building covered in ivy—Klause II (Tavern II), 2006—faces the stand. Wall texts are virtually absent throughout, except in one room: a facsimile museum gallery (Viebrock’s Exhibition Room, 2017) stocked with social realist paintings. Although the labels state that Angelo Morbelli painted the works in the 1880s, amid so much fraudulence they feel fake. In reality, he did paint them, but the resulting feelings of uncertainty are all too frightening in a sinking city

Started to do some reading around the model as miniature, ambiguity of scale etc.

Makes the much larger studio rig portable – I can take this around and work out of the studio, on a small scale.

Need to see the installations to fully appreciate the role of models in their work.

The liminal studio – a kind of mobile studio that can be setup anywhere. In transitional places

The Deadhouse –  liminal studio in Portland

Improvisation in materials and place.